Return of the Picts 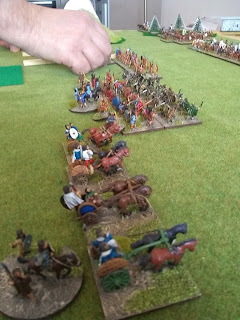 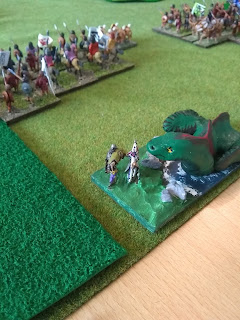 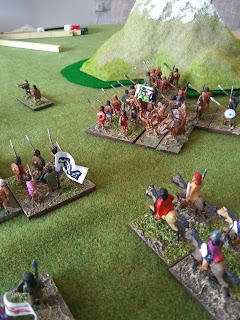 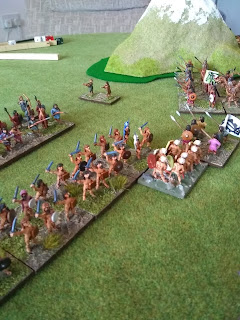 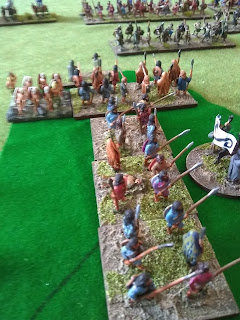 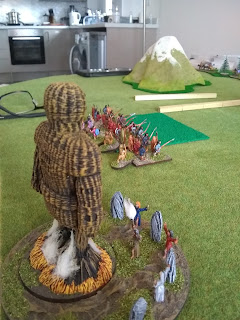 Posted by Scotsgrey at 04:41 No comments:

General Oku, 2nd Imperial Army issued the following orders for the attack on Cairn Hill.  The front to be divided into three sectors the central sector Big Fish Hill 4th Division and the two flank sectors to the North focussed on the summit of Cairn Hill 6th Division  and to the south on Tassu Brook 3rd Division.
The central division to advance at 19.30 to seize Big Fish Hill, to hold this position preparing to give fire support onto gun Fort Hill is required then to advance the Russians have been attacked from behind by the flanking force
A division attacking down each flank sector in a night attack, (sunset 19.30hrs) the Tassu Brook Sector to flank the Russian trenches and attack from the rear.
Extra ration to be issued prior to the attack. 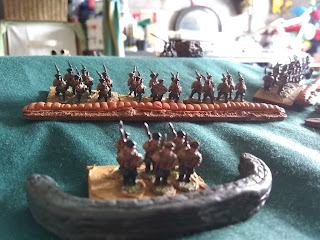 General Obuku 6th Division attacking Cairn Hill
Register artillery on all targets across the rear of Cairnhill and the Mandarin road and the Corp artillery on Gunfort hill.  To be used only as a last resort.
The attack to initially  concentrate on the centre with MGs supporting the assault.  If no progress change to flank support. Once the first line is taken consolidate then Push on until the main objective Cairn Hill is captured again with MGs support the point of the assault.  No weapons loaded return fire only when pinned and cannot advance.

Turns 1-3 saw general movement in the dark, 9th Siberian Division initial force was confronted by the wall of 6th and 4th Division and fell back through Gun Fort Hill. The Russian artillery pounded Big Fish Hill,  however 4th Division remained on the reverse slopes.
Turn 3-10 Revealed at times by illumination round sees bitter fighting on CairnHill with the 2nd ESRR driven out of the first line trenches and the Japanese suffering high casualties.  Gun fort is giving fire on Japanese Companies pushing up the Mandarin Road under artillery fire. Gun fort itself is under fire from the Japanese Corp artillery.
On cairnhill  Obuku is with the MG Company almost getting caught by the Russian counter attack, this MG Company allows the Japanese to hold out in the 1st line trenches but quenching their attack.


Turn 11 1am Stackelberg leads 1st ESRR in a bayonet charge to clear the Mandarin  Road
By Turn 12 The fighting on Cairn hill looks burnt out with the Japanese holding onto the fist line trenches and delivering MG and mortar fire.  However the fourth Regiment is still infiltrating up the Mandarin road as Stackelberg retires.


1.30am Brook fort on the other flank has been disturbed, the garrison commander has got illumination to revel 8 battalions of Japanese on the flank with much of the wire cleared.  The fort is swept with MG fire and HE but holds out reinforced by Big Gregory the divisional operations staff captain.  The initial attack is held on the summit by Kossakowski leading his own bayonet charge in the face of Japanese Banzai charges.  Kossakowski is wounded and taken prisoner with the regimental commander.  A mobile MG Company cuts down five Japanese companies on the Summit. 3.30am Stackelberg has sent in the 39th ESRR the last reserve and the Russians win the bayonet fighting but the 39th breaks due to its own casualties.

Back on Cairnhill the Japanese have pushed right onto the Russian trenches from the flank of Cairnhill supported by the MG fire in the first line trench by 3am. Russian rifle fire is appalling.  Local bayonet charges are made by the Russian culminating in a two battalion charge which is cut up by Japanese rifle fire.  The Japanese artillery are now firing on the reverse slopes of Cairnhill hitting the forming up areas for the reinforcements,  Remarkably by Dawn the Japanese are in possession of Cairnhill.  The 1st Siberian Division has withdrawn. 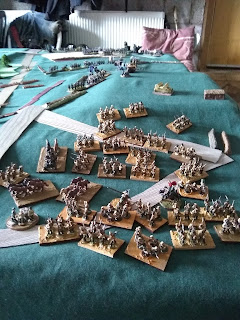 This was the first night action of the campaign with both sides giving decent plans.  This is the most interpetation I had to do for one battle.  There was a Japanese Army commander and a Japanese Divisional commander, I am focussing here on the Divisional Commanders Night action

Currently using word maps the players can draw on and send back to me.  In this battle the Japanese player had an order sheet amended from Great War Spearhead


I also got a fantastic map which I printed out and annotated with casualty figures, the successful attacks were made by the MG Company and the 2nd & 3rd regiments 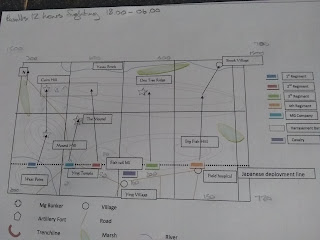 The Russian Player was really screwed by both flanks being left open the other Russian corps falling back under orders from Kuropatkin.  Russian commanders of the time started to question the thinking of "the Staff".

The gap was covered by machine guns in a kill zone 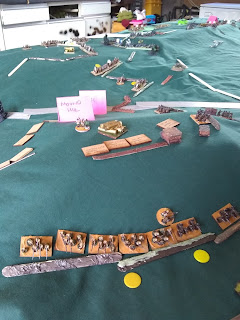 Posted by Scotsgrey at 00:02 No comments:

Posted by Scotsgrey at 12:37 No comments:


More Saturday action for my Russo Japanese Campaign.  Spearhead is a good system for order execution. there was a lot of musing on whose left flank the Japanese General OKU meant.

New month new campaign.  The Russo Japanese War 1904, chosen as it has generals that are looking at technology they dont know how to use. I wanted players to command armies and divisions.  The players give map orders and the battles are being played by me as umpire.

Battles are being played I went for the Great War Spearhead Rules. Players can improve their troops with minor changes to TOEs, training ideas and of course hindsight. 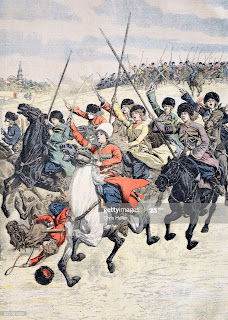 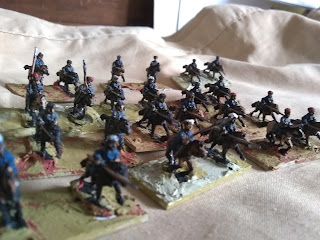 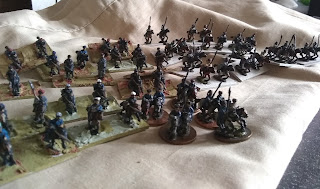 Scenario Ragu River Fords was the scenario title.   Mishcenko made no attempt to look at the ground for a second ford was at the temple.  He went for a flank attack with a shock frontal assault with infantry covered by artillery over the river then a flank attack with his Cossacks.

Kossakowski focussed on a plan of defence based on firepower sitting back to get the benefit of his artillery.  The female cossack sotnia crewed the MG covering the ford.   The artillery was off board.
Mishenko’s artillery pounded the centre village for three turns, got some suppressions but no kills.  Kossakowski’s artillery observer, his son in law, Boris  was wired up with a telephone directly to the off table batteries, sighted on Hill C.


In 2hours fighting the result was a resounding win for Kossakowski , losing two bases of Cossacks but inflicting 8 infantry (7 to MG and artillery fire on the ford) and 5 Cossack casualties on Mishcenko whose command broke.  His artillery were out of ammo

Posted by Scotsgrey at 11:23 No comments:

The German Battlecruisers have led their British counterparts into the classic trap to face the whole of the High Seas Fleet but heroic action from the lead ships and critical events save the day, turning the jaws of victory into a defeat.  At the outset of the battle the Germans heavily jam all radio communication and do so for a further 4 hours to aid their Uboat patrols 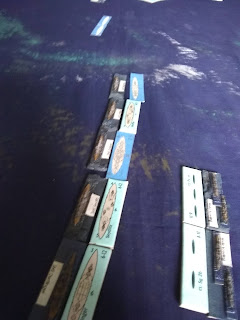 Turn 2 HMS Furious gains a critically hit on Seydlitz which explodes.  However HMS Courageous and Furious come under fire from SMS Seydlitz,Moltke and Bayern at close range.  1st Battlecruiser Squadron turns away abreast. British Destroyers from the rear and Light cruisers on the flanks close to cover this turn away
Turn 3 HMS Courageous and Furious turn away at high speed burning, Derfflinger illuminated by the exploding Seydlitz becomes the focus of Destoryer Flotilla 11.  British 3rd Light Cruisers blunder into the high seas fleet, totally destroyed by the Fire of SMS Thugrigen, Nassau, Moltke, Bayern & Defflinger, they still get off a close range torpedo strike on Thugrigen which suffers 10 flotation hits.  British 2nd Battlecruisers open up on the German battlecruisers. 1st Battlecruiser Squadron completes its turns away now steam in the wrong direction. 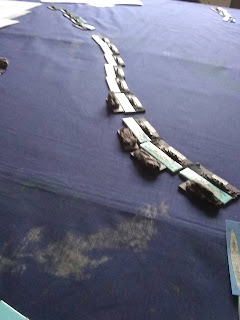 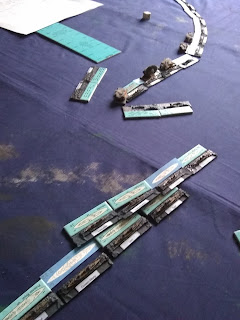 Turn 7 Both sides break off.  Pakenham is alive. Hipper in SMS Baden leads his part of the German fleet head for port.  The mutineers head for Keil. 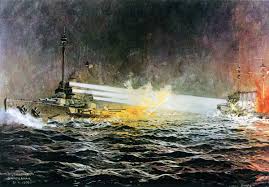 Posted by Scotsgrey at 06:39 No comments: