First Strike Flames over the Falklands


I was so keen to play with these rules I couldn't wait before the modelling was finished and I had soloed the rules.  throwing everyone into it on a Tuesday night just like the Falklands Conflict itself.  I'll prepared with substitute equipment.  We went raw into the game reading the rules while we played afterall they were only 8 pages, 5 about battle who needs a QR.

The British Player had two harriers each Two GR3s and two FR1s  the Argies had a pair of Mirage 3s on a high level sweep.

Turn One every one took a tentative move onto the table flying as a pair and checked out the order list, a bit of a struggle to understand energy and action points.  the argie player shows round pictures on his mobile of a Mirage at an airshow and recalls how low loud and fast it was.
Turn Two  First up we saw the SHARs turned into the enemy  the Mirages went supersonic using up 3 afterburner markers in a row but avoiding a bingo result.  The GR3s plough on to their target
Turn Three The  SHARS climb to pass the enemy head on.  The mirages go supersonic again close for a head on pass fire guns roll two 6s and riddle a harrier from end to end the lead SHAR gets a reply and misses. Both Argie  lead and wingman and pull hard to avoid San Carlos SAMs.  It is  also turn towards Stanley the wingman fails for bingo and is low on fuel.  The  SAMs the remain SHAR is still over San Carlos and gets hit by SAM and blows mid air.  The GR3 plough on to their target The result for turn two half the British for forces are out of the game. The original pilots were right to think about combat at medium or high level!
Turn Four The GR3 plough on to their target.  The lead Mirage stays supersonic again 3 afterburner markers closing on the GR3s. His wingman follows and goes low.  The lead Mirage bingos to low fuel.
Turn Five  The Gr3s bomb Stanley airfield, both hits and rack up four damage then try to turn into the Mirages,  he was  more interested in dropping his load playing on to get into the Mirages.  the Gr3s then trys to viff into the Mirage losing a mass on energy.  The lead mirage dives and turns into the rear of the GR3s launches an IR missile he again rolls a 6 blowing the back end off the harrier it crashed on the shore south of Stanley.  The alert team of SHARS enters from the North and 2 Skyhawks from the West.
Turn Six The lead mirage turns into he Atlantic to the east, his wingman turns west temptingly just out of range of the missiles of  remaining GR3 which powers up to 4 energy. The FR1s concerntrate on the skyhawks turning almost due east.  The Skyhawks split north and south over West Falklands.
Turn Seven  The lead Mirage turns back over West Falkand still at 6 energy, his wingman turns north east towards the Skyhawks is he going to cover them?  The GR 3 turns into West Falkland to line up on the lead Mirage climbing up and falling back to 2 energy.  The Alert SHARs close on the Skyhawk heading north at full tilt.  The North Skyhawk doesn't jettison bombs (seriously thinks about it) but turns hard into the SHARs ending over Pebble Island. The Southern Skyhawk turns back towards San Carlos, closing on the Mirage wingman
Turn Eight  The lead mirage turns into the GR3 at full tilt blowing through at 30cm. the Wingman heads for Sancarlos.  The GRs turns and dives  for San Carlos somebody is going to get the rest of his load. the Alert SHARS tryto Viff their way into a firing position but cant trun hard enough. The Skyhawks both head low for San Carlos
Turn Nine and Ten  The lead mirage and his wingman throttle back approaching San Carlos again ,this time with a harrier out to the west.   The skyhawks launch their bombs  (6.6) at Score Hits, the Gr 3 launches missiles and miss with both. the SHARS get their energy back up and one of them bingos for fuel but they cant catch the Skyhawks.

Turn ten was the last turn it had taken just over 2 hours.  all the players would play the rules again two were however still struggling with the concept and balance of the game.  With so many lucky 6s from the Argies and actual harrier shootdowns this gave I think a false impression.  Now to get on with modelling some real Falklands houses and completing the aircraft camo.

Labels: Flames over the Falklands Wings of War

Digging out old armies from the past is always a treat for me, we were fighting a battle in Willie's garage using Hail Caeser.  Romans marching to the fort are ambushed on the way there.  Four players two Roman's tao hairy Woads

Mahdi forces invade Egypt, we were playing the" To the Last Bullet Scenario" with restricted ammunition.

My highlanders are over 20 years old, true veterans!

first game saw a win for the anglo Egyptians, we turned this around rolling a gain for commanders and ammunition I rolled a double 1 giving me an incompetent commander and rolled 1 for ammunition.  I was all for forming square and fighting it out toe to toe, however I was quickly driven back then outflanked. 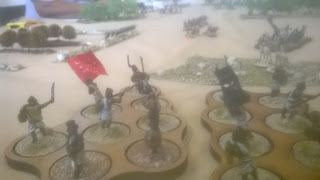 Posted by Scotsgrey at 03:10 No comments:

Labels: 15mm Peter Pig, Sudan, The Men who would be Kings Rules

Saturday came and we had three players, one panzer grenadier  and two british, we chose to play a delaying action the panzer grenadiers would use 650 points but deploy completely on table, against two 450 battlegroups. A 50% point advantage.  The British would play as two separate Battlegroups given their propensity to suffer from command chaos.  Starting will all their recce on table and getting 1d6 reserves each a turn


Midders had lost all the support vehicles, no comms team, recovery, ammo, 6pr, off board mortars, FAO Dingo had gone and the FHQ was back in their Jeep.

I had two scout carriers and Jp had three Stuart Tanks to wrinkle out the Germans on the 4x10 table, the germans chose the direction of attack and we were playing up the length. 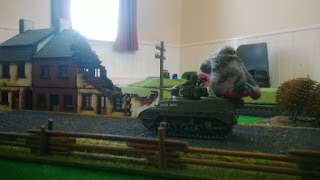 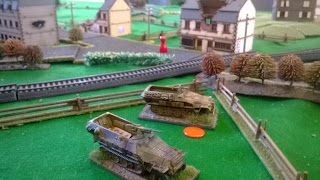 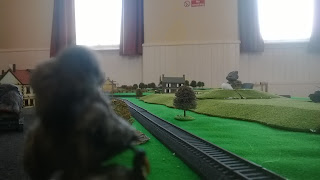 The Tiger 70" away. in this picture it is a coloured blur just to the left of the farmhouse on the far wooded hill , takes out its first kill Stuart no2 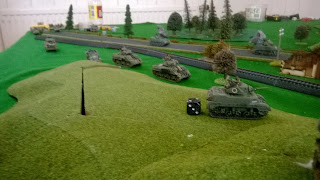 One Stuart does make it spearheading the Shermans of Battlegroup Perston onto the flat hill and out of the Tiger firing line this triggers a charge by panzer grenadiers forward and into the attack.  Most of Battlegroup Preston's dying was on this hill 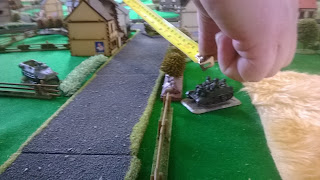 Scouting carriers gets taken out by a panzerfaust 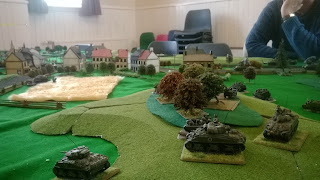 Now working my way around to the left I had tried to got right up the middle but changed my mind after the panzer grenadiers flooded the buildings in the centre and then tried to pick off my forward HQ.  20 -30 inch Mg fire from the houses had hit them as they pushed up through the woods however af ter the first shot I rolled a successful Beyond the Call of Duty and hastily drew back to the jeep. 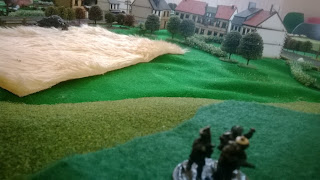 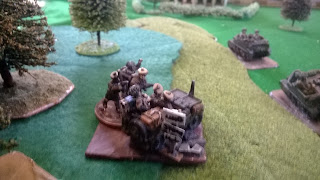 The carrier platoon was formed up the engage the panzer grenadiers in the houses while I hoped the Shermans with the Rams scooted up the left.  the attack on the left knocked out  a hanomag but paid for it in Shermans.  A single survivor of a panzerscheck team blighted by a low ammo counter still put a single successful round into the Sherman Firefly.  in turn he was killed by the bren carrier survivors 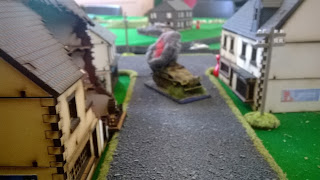 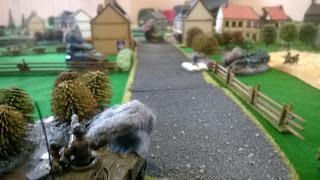 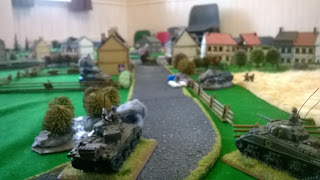 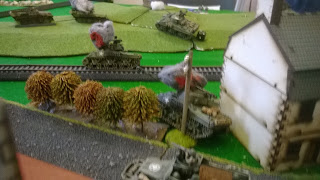 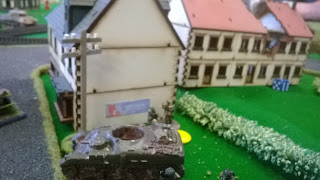 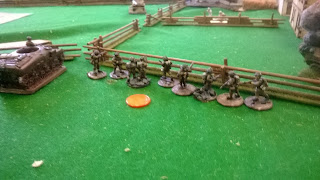 Rams get into action, the Platoon Command Team is pinned after failing a close assault order
Time was called and the British had lost 25 BP(Preston) and 21(Midders)  The Panzer grenadiers held all of the objectives and had lost 40 from 42 BP
Posted by Scotsgrey at 11:50 4 comments:

re configured my British this time for a 600 point battlegroup, I was inspired by this garden in Moffat, 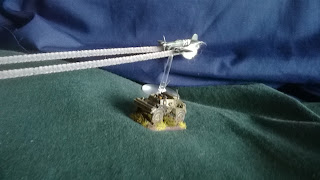 In the battle they didnt appear 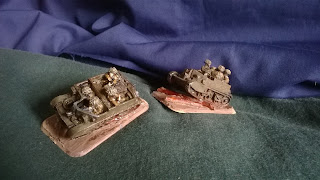 Sherman tank troop with a n ammo truck and a wrecker 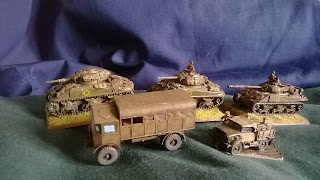 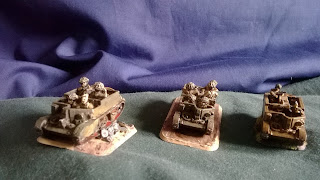 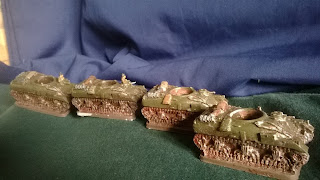 a 6pdr with a llyodd carrier 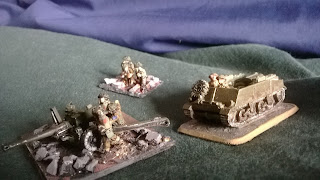 I was expecting this to be a hard fought attack/counter attack scenario battle and to be mauled by panzer grenadiers.

Posted by Scotsgrey at 11:14 No comments: