Willie had got some new fixed defences which we had to try out here are some of the pictures I took. it was a good battle for my Soviet defenders.  The German players each had a platoon (one pioneers),  then split up 4 panzer 3s, a sniper team two mortars and a tripod MG team in support. In points terms for Battlegroup two to one for the Germans.

This was a massive 15BR with three officers and one dice of orders.  However they fought like Soviet heroes.  The plan was not to go onto the firestep until the fascists had crossed the stream 20" away then the AT Gun would move up to fire.


Willie has some great 15mm Germans that we hardly see on the table.  the germans rolled up to the stream after they had sent in the infantry to cover the Panzers.  Of course they only had 37mm VL guns

Repeated area fire from my soviets pinned down the fascist advance and they had to dig deep into the chit box to get mobile again.  Sniper team picked off the maxim gun in the dugout but I picked a MINE STRIKE counter rolling a six to knock out a panzer3!
German mortar fire started to rain down but with no effect.

I had to step up the infantry squads who died like heroes, one squad wiped out to the last man by German fire, but rolling a 6 followed by a 6 .his Beyond the call of Duty saw him kill two of the enemy squad which became pinned down.  Meanwhile the AT gun under tripod MG fire Knocked out all three of the German Panzer threes over the next two turns. Wille had to use his one tactical co ordination to boost  his firepower on the last MG Bunker even so one man survived.  MG bunker still had a single crewman who pinned done the squad below. Just over teo hours and the Soviet BR was exceeded at terrible cost to the Fascists. Two hours closer to the Winter Snows
Posted by Scotsgrey at 14:43 No comments:

We wanted a straight forward infantry fight in a urban landscape, 1943 lists we used but no specific scenario.
The goal was to have a long battle over two nights.


Fascist List (Willie, JP and after turn 6 Sparky each with a platoon)
In the town square we placed Willie's destroyed Panzer IV, a nice piece of work, we entered from an opposite  board corner each, with the Soviets getting the first move on a dice off. 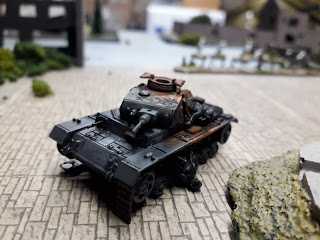 I deployed my First Aid Post right in my corner, the table was laid out with JPs destroyed buildings, the next two shots show it, these building have been used repeatedly in our WW2 battles.  Inside I placed the sole battle chit I got in the first six turns. 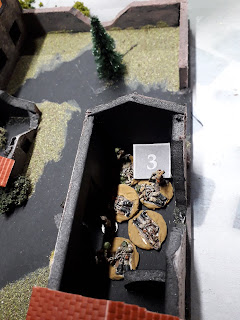 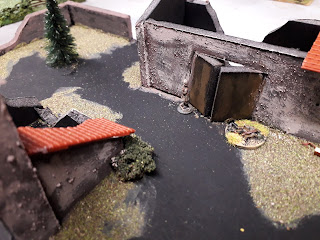 This is my twelfth urban fight with the Soviets. I had a prepared plan based on the management of the 2D6 with six officers and not using the "Ura Ura" rule which has ended in massive casualties in the past. The snipers to fight the firefight their ability to hit targets early on with long range fire critical.  The rifle company to provide the attacking push with fire and move tactics once within 10".

Turn One was devoted to getting the Snipers in position protected by the scouts and to move a platoon of infantry over onto a flank.  I rolled high and was able to get a second platoon too.  I had an outstanding start. The Fascists were able to get two platoons moving and set up a pair of mortars.

The tone of the first 6 turns was set with German squads suffering sniper casualties and being pinned down.  this slowed their advance tremendously.

By that stage I had moved a whole platoon onto the right flank of the battle bumping one German platoon spearheaded by a sniper team and a foot patrol.  One German squad was wiped out but my " Patriotic factory workers"  ended up pinned down in cover unable to push further forward.  The building in the picture below was contested by Willie's platoon all the way to the end of the game but I had committed the bulk all of my Rifle Platoon to either fire or movement it drew in some of the German reserves as well' 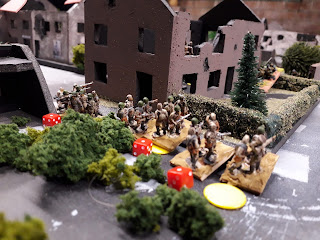 Action in the centre of the table wasn't as good,  the focus for me was the Sniper battle two teams firing on JP and one on Willie.  The key position for me was the Church on the plaza.  Holding was proviiding security for the rifle company, but the sniper team in the tower had been spotted early and killed by JPs machine gun fire.  The foot patrol had crossed the plaza but were spotted by Willie and wiped out close to the Panzer IV. 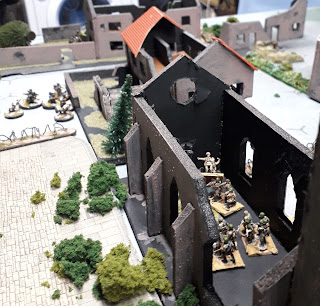 Willie made an attempt to widen the assault but couldn't get my "factory workers" cleaned out in time.  JP went to ground waiting to return fire and then advance after the NKVD team had been finished by him and my cocky snipers. on top of this the third German platoon was spread out to support Willie flank attack their tripod MG had been set up in a second storey building specifically to kill those snipers.  The last six turns saw less intelligent play from me as I had strayed off the plan.  based on 1943 it was a good battle.


The battle resulted in a Fascist victory on battle rating in had drawn four 4 BR chits but my total was 31 to a mere 23 for the Germans. The German lost most of the BR to sniper fire with a lot of tactical co ordination from Willie to keep the lead squads in the fight and stopping the steam roller of the Rifle Company.

Posted by Scotsgrey at 16:03 No comments:

I wanted to play a NW Frontier Game. We were ready to go with a quick choice we had 24 points consisting of Gurkha unit led by a Bullet Proof Burgler, a Sikh gun with a Good chap in command, and two standard Highlander units led by a CAD and the other by a YelIow Bellied BOUNDER.  It became apparent that the imperial attackers are led by the leavings of the Regiment.  the defenders had two irregular foot each with a brave commander and two tribal Infantry who were both the Favorite nephew's of Gul Shah.

This gun did sterling service getting 8 hits on the yellow doored block house, pinning down tribesman trying to rush the Gurkhas and driving back tribesmen attacking the Highlanders


The highlanders, led by "the Bounder" managed to give covering fire to their partner unit who scaled up on the left and stormed the buildings 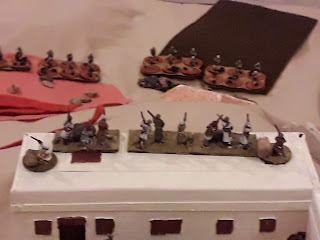 The attack was a success for the Anglo Indians mainly due to the Sikh gun, they took over the defence.  We then had the Tribesman attack at Dawn with 36 points. 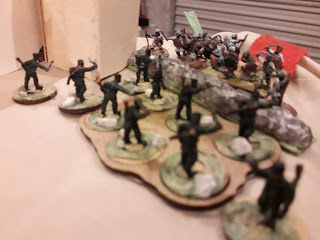 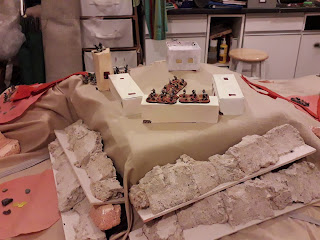 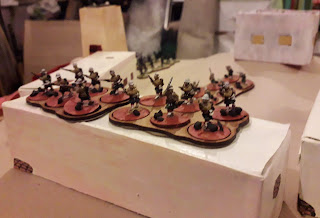 Posted by Scotsgrey at 14:04 No comments:

Battlegroup Barbarossa battle 500 points a side. Recce Screen Scenario with a victory for 7th Panzer Division taking all the objectives.

Soviets had a BT-7 Company one KV and a Platoon of infantry in trucks. 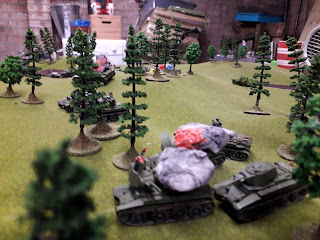 Posted by Scotsgrey at 04:28 No comments:

"Disaster" in the Wallonia

Captain Slaughter's Plan
Step One Lt Atkins to slip into the town and fix the Germans attention. 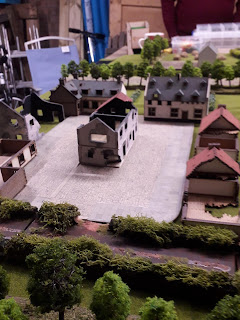 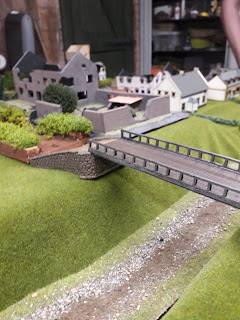 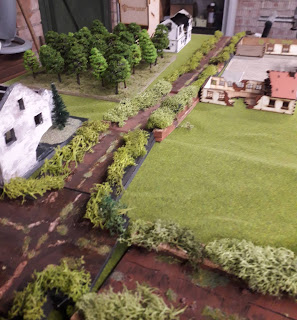 Battle Commence, immediately poor radio transmission leaves each platoon operating in isolation all three platoons are out of touch with Captain Slaughter in  battlegroup HQ.  In CSM Punishment's opinion Captain Slaughter is the one out of touch with reality.  Lt Scarlett passed through the woods and was killed in front of the White house in this pictures foreground.

Lt Atkins kept the jerries occupied, Sargeant Sly hugging the wooded river bank managed to get within assault range of the Jerries but his boys wouldnt charge home pinned down by spandau fire.  Atkins rather luckily got most of the sections into fire positions, rattling fire into their dominate position.

Lt Disaster's lead carrier ran into a Panzer schreck ambush, who in turn paid the price. The last carrier was pinned down repeatedly by nasty Jerries hidden on the second floor of an old wreck.  Disaster later brought down a vengeful mortar stonk.  Jerry had melted away victorious.

Scarletts's death had made the whole company think of vengance on their next encounter with Jerry.  Scarlett had been very popular and known to the men as "Crumpet hunter"
Posted by Scotsgrey at 12:10 No comments:

Willie had a scenario ready to go when we arrived in the garage, the table was sent up with a ridge across the middle bisected by a road leading from the desert edge to the Nile.  The British lined up ready to assualt the Arab/Beja held ridge, some confusion as to where the British Naval contingent would arrive.

Little did the Arabs know what was to hit them Major Disaster with his bugler Corporal Punishment!


The Highlanders led the advance forced into the centre by thorny scrub.  they made good time Doubling right up to the ridge but ending up one unit after another.  The Fuzzies came forward on the Donkey track with Camelry but these were repulsed by Major Disaster and his Hussars


The first highland unit spent sometime pinned down under fire from the Arab shooters, their inexperienced leader was useless to intervene

Once rallied the Highlanders got into the Arb Position forcing them out at bayonet point. Things however became desperate the follow on units didnt advance now under artillery fire.
However the tribal infantry refused to close in on them failing order after order to get in


The Highland commander was dismayed at the lack of naval support, the Naval Gun did silence the Arab battery but this went unnoticed while the Major Disaster struck, In all the Major crushed four units until he ended up surrounded by Fuzzies 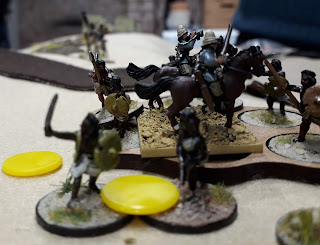 Posted by Scotsgrey at 12:41 No comments: